Watching the luxurious tv show Game of Thrones it may surprise you to find where the series scenes in Westeros are filmed. Kings landing and section with Daenerys are in Croatia and the European continent. Iceland is sued for the very frozen North beyond the Wall. Most though are filmed in Northern Ireland. It’s hard to believe that the locations are so close to home there is even a tour you can take. To make the most of you trip why not look at Log Cabins for sale NI at http://logcabinsnorthernireland.com/ so you to could have a stedding in Westeros.

Let’s look at some of the locations? One you won’t find easily is a personal highlight for the author was scene were Bronn is discussing going away with Jaime Lannister on a mission to his soon to be wedded wife. I know for a fact that is was filmed in a layby of the A20 Portaferry road overlooking Strangford Lough. The castle was computer generated though.

The main site you can visit is the national trust property of Castle Ward. This is no longer a Castle but is in fact a stately home. It was a castle once defending the entrance to Stangford Lough but it is now in ruins. There is enough of it left though to make the castle of Winterfell, the home of the Starks. The ruins are transformed into the mighty fortress with wood additions and fake snow plus copious amounts of mud and straw. Don’t try to visit the courtyard shop on that day!

With its rugged coastlines and rolling plains plus the mountains of Morne the landscape of Northern Ireland provides a chameleon like backdrop to the action of the series. It’s quite remarkable that a small country such as Northern Ireland can provide the amount of scenes it does. It has many parts ot play and is almost a character in itself. The pristine yellow sand of Portstewart Strand becomes the beaches of the Southern most kingdom of Dorne. There is a cost implication and the production does benefit form certain tax advantages afforded them from the Northern Ireland executive. The use of the Titanic sound stage, built on the site of the old whitestar shipyards in Belfast helps to provide most if not all of the interior shots. But with the peace dividend  and the relatively unspoilt countryside it is the tourism shot in the arm that Northern Ireland greatly needs. 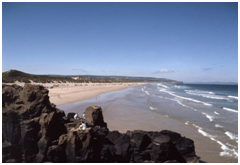 Other highlights include the dark hedges a series of beech trees lining the road near Stranogrum County Antrim and the caves of Cushenden. Another is the Temple of Mussenden overlooking Downhill Strand beach plus Ballintoy the home of Pyke and the Iron islands. It real is a show afficandos dream.