You might think that art is strictly to be found in stuffy museums and art galleries. But if you stop to look around next time you’re walking through the centre of your home town or city, you’ll be amazed at how much has been created that can be viewed as public art. Even the architecture of the buildings has been designed to be aesthetically pleasing – well, apart from anything built in the 1960s! Here are some fine examples from around the UK of very public works of art:

This is an ingenious piece of public art that features a 7m high fake ruin which has been built to cover up the rather unattractive back-end of an Iceland supermarket. It was created by trainee bricklayers from the local college and offers a tongue in cheek, fun addition to the surroundings. It fits in incredibly well with its surroundings, helps foster a sense of shared public space and disguises what would have been an ugly urban area.

Angel of the North

Just outside Gateshead, the iconic Angel of the North is probably one of the most loved pieces of public art in the UK. Erected in 1998, the 70-foot-high sculpture has done a lot for putting public and industrial art back on the agenda. It’s also been highly effective in transforming the perception of a region. The closer you drive, the bigger she gets with her 90-foot span looming over you as you pass. Antony Gormley’s sculpture has done much for art and for the North. Fancy your own metal garden sculpture? Find Corten Metal Sculpture designs at http://afsculpture.uk. 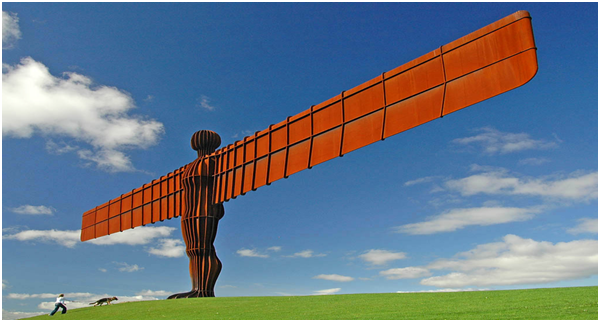 This beautiful piece of art has been placed on the pebbly beach at Aldeburgh. It is a dramatic sculpture by Maggi Hambling and a memorial to Benjamin Britten who came from Aldeburgh. A line from one of his operas is forged in the steel which also allows the sky to be seen through the work of art. The steel scallop is a poignant and attractive piece of modern public art that cries out to be touched with its undulating metal ripples.

Four artworks were commissioned in the Pennines, collectively known as the ‘Panopticons’. One of the favourites is the Singing, Ringing Tree which has been placed at a high point for amazing views over the Pennines and looks like a tree being blown in the wind. Made from pipes, when the wind blows across the open land, the pipes produce a haunting, otherworldly sound that echoes around the landscape. 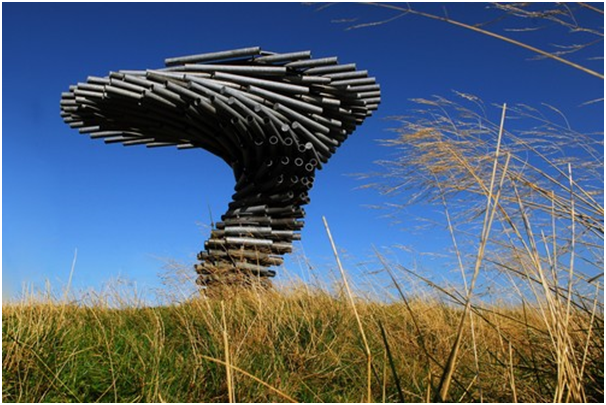 Artist Simon Faithfull uses a digital device for his sketches and has been for almost fifteen years. If you’re ever in Liverpool’s Lime Street Train Station then have a look at the steps and you’ll begin to notice pixelated etchings. All around, in the windows and paving stones are 181 of the artist’s sketches celebrating the city of Liverpool in the UK and the lesser known Liverpool in Nova Scotia. A great way to pass the time while waiting for your train.