It is the year of virtual reality. At least, the year in which this technology finally begin to show what promised for decades. This phenomenon promises to revolutionize all disciplines and raises significant changes in areas such as video games -this has been the focus of most developers in the first instance and entertainment, but also in areas such as training and education, research and development or industrial applications.

Virtual reality is more fashionable than ever

The virtual reality has been one of the key trends of the last Mobile World Congress, and it seems clear that 2016 will be a crucial time for the launch of the most ambitious proposals year – Oculus Rift, HTC Vive – and others as well. Who want to conquer more and more market – Gear VR Samsung and Google Cardboard and its potential successors – to which must be added other alternatives that will also try to get an egg in this segment.

Whether you use one of these alternatives in the coming months as if you wait for the waters to calm down and proposed manufacturers and developers are clearer, what is clear is that the excitement generated by the virtual reality is maximum.

That expectation is not new, and we literally decades hearing about a field that has had particular impact in science fiction films or films in which the technology was very present. Jaron Lanier in 1985, which by then was 24 years was the first really raised could be routed where this segment. His company, VPL Research, managed to capture the interest (and money) industry, but end up being forgotten (and bankruptcy) against the broken promises. Lanier was ahead of his time. 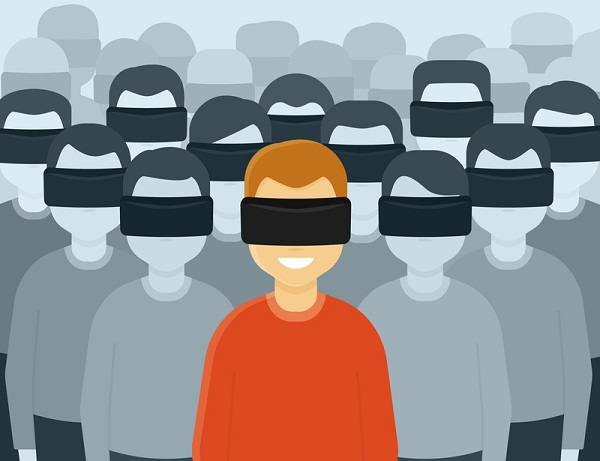 “One thing is clear: None of the big technology – except to apple – seems to be willing to lose camber in this race”

However, that time has come now: Microsoft has its own stake in a slightly different context, that of augmented reality, and just offer their Hololens developers, while as Google was saying is investing heavily in this area will post by Magic Leap one check of $ 542 million.

Sony is working on PlayStation VR, a proposal that will take slightly longer to reach the market, while Samsung demonstrated in this recent MWC how virtual reality is fundamental bet their thanks to the alliance with Facebook, which owns Oculus new terminals and absolute protagonist in this area which Zuckerberg has described as the next big social platform. HTC seems that lives could represent just a lifesaver in view of its sales in the segment of smartphones, and even LG presented its own proposal, the LG 360 VR in the MWC.

If there is one thing clear, it is this: none of the great -except to Apple- seems to be willing to lose this race, and all are positioning themselves for or, at least, have a proposal that meets the needs of the maximum number of users possible. In addition, yet none seems to be concerned about the changes that these devices can pose to our own reality. The truth, we mean.

How is it to be 48 hours immersed in virtual reality?

Indeed, some begin to try to draw conclusions in this area. Thorsten Wiedemann, founder and artistic director of A MAZE Festival, wanted to consider an interesting experience: that of being 48 hours immersed in various virtual worlds through the lives and the collaboration of different developers who provided the alternative virtual environment HTC.

For Wiedemann, who called this project ‘Disconnected’, the idea was not to set a Guinness record but try to understand the consequences of continued exposure to virtual reality. After experimenting with all kinds of games and virtual scenarios that were prepared for the experiment or other developers they were sharing -including games and multiuser scenarios seemed Wiedemann be clear that “the virtual reality trips are possible long – term”:

Not everything went smoothly, beware: this artist was about to retire after 25 hours of experiment, but not because he had physical problems. Do not hurt his eyes; he had no headache or nausea. Simply it explained that it was necessary to create content specifically dedicated to offering a fully immersive experience, which in his opinion will still take at least a decade in coming.

However, there was a particularly interesting comment in the design of this experiment. This year, he said, many people spend a lot of time connected to virtual reality systems, and according to this artist, “a long journey will be special and could be understood as a controlled drug use experience.”

That is for many a potential analogy for virtual reality, which could become an element of more technology addiction for the general public as they have been other technologies such as the Internet or video games. May present experiences are far from perfect despite having surprised us, but the quality of the dive will only increase in coming years and that could make what we experience in the real world and what we see in the world virtual not easily distinguishable,

Ray Kurzweil already predicted in 2003 and raised its particular dystopia “in the 2030s virtual reality will be totally realistic and convincing, and spend most of our time in virtual environments … we will all become virtual humans”.

“That seems to be one of the real dangers of virtual reality: that poses a much better alternative to our real life”

Can we resist living an alternative reality so perfect? Some do not have anything clear. As noted in The Atlantic, in 1996 Peter Vorderer, a professor at the University of Mannheim, and defined the virtual escapism that will make users take advantage of virtual reality to escape from our reality:

Escapism means that most people have, due to unsatisfactory circumstances of life, sufficient cause to ‘leave’ the reality in which they live in an emotionally and cognitively.

That seems to be one of the real dangers of virtual reality: that of raising a much better alternative to our real life. It is a much more powerful way to escape from that raised at the time the radio or television and internet now pose, video games, mobile or social networks. Immersion, in this case, would be virtually complete. Who would not want to change his unhappiness with a perfect virtual reality life?

In the cited article in The Atlantic, they debated the dangers that exist today -people who refuse to leave home in Japan (‘hikikomori’), Compulsive World of Warcraft- players and even made it clear that these were extreme cases, virtual reality alone “could exacerbate the problem.”

For some experts, these “virtual breaks” may not necessarily be harmful, and Jim Blascovich and Jeremy Bailensen, authors of the book Infinite Reality, and indicated, “who should decide whether a virtual life that is better than real life is something wrong? If someone is able to feel complete in their needs in an immersive virtual world, who are we to tell them they should not?”.

In fact, that perfect virtual reality could indeed pose problems. We did not say no psychologist or scientist, no: we said it Agent Smith in The Matrix, a film that just played with the concept of virtual reality. In his private conversation with Morpheus, Agent Smith just he talked about these perfect worlds:

Did you know that the first Matrix was designed to be a perfect human world where none suffered and where everyone is happy? It was a disaster. No one accepted the program, entire crops were lost. Some believed that we did not have the programming language to describe your perfect world. However, I think, as a species, human beings define their reality with sadness and suffering. Therefore, the perfect world was a dream that your primitive brain constantly wanted to wake up. That is why Matrix was redesigned so, at the height of their civilization.

Dystopias about the impact that virtual reality could have on our lives are not new- the film ‘The Lawnmower’ 1992 is a great example of that kind of filmography-, but there are two recent examples that will surely be particularly representative. The first novel” ‘Ready Player One’ by Ernest Cline which also will become a film – and the second, much less known, a short little you have to do from start to finish, genuinely, look to, insist- for We understand what we might face.

In ‘Uncanny Valley’ one seems to consider that things will not be as problematic until the short is progressing and is realizing that whoever is involved in these virtual worlds are not people who use them casually. As now pose manufacturers: are addicts, junkies an alternative that just link to another dystopia: the threat posed by the evolution of artificial intelligence.

In the end, this short Matrix has many similarities with, and although both works must be taken as what they are, perhaps it is necessary to try to raise certain elements that protect that experience to not end up being harmful to those who use it. As the psychiatrist, Keith Ablow explained long ago, it is curious that there is nobody to regulate such devices, which can have an impact on our health.

You may virtual reality glasses promise us great experiences in the world of video games short term. The problem is that maybe these experiences – and above all, who come affect us in ways we do not understand. Addiction phenomenon and its consequences in the transformation of those who exploit should be monitored, but the question is who should do it?