Is there a person anywhere who enjoys driving in London? It’s certainly an experience to raise the blood pressure! A barrage of traffic lights, cyclists, buses, taxis, roundabouts and congestion charges. You might get used to it, but is it ever enjoyable? When you’re stuck in endless tailbacks, it can be so tempting to nip into the bus lanes and save a little time. Other people seem to do it, right? Here is some information on the bus lanes of the capital, who can use them and when you can’t.

There are many bus lanes in London as a city this busy needs a robust and large public transport network to cope. The buses keep hundreds, if not thousands of cars off the roads, easing an already full to bursting road network. Imagine how many more cars would be on the roads of the capital if there weren’t so many buses!

The bus lanes in London are defined by thick white lines. Some lanes can be used by different vehicles, which will be indicated with road signage. Other vehicles that can also use bus lanes include taxis, bicycles, scooters, motorbikes and mopeds.

A lot of the bus lanes have specific hours of operation. Any vehicle can use a bus lane outside of these peak times. Operational times will be displayed on large blue signs. Signs will show pictures of which vehicles can use a bus lane at any time and the times when restrictions are in place. When there are no restrictions in place, car drivers can also use the lanes, saving time and easing congestion. Depending on where you are in the city, operation times do vary so it pays to always be alert and pay heed to the signs when driving.

If you need to drive in London, be sure to always check whether you can use a bus lane or not before entering one. Alternatively, leave the stressful driving and congestion to a professional and book Coach hire Gloucester from https://www.johndixtravel.co.uk for your trips to the capital. 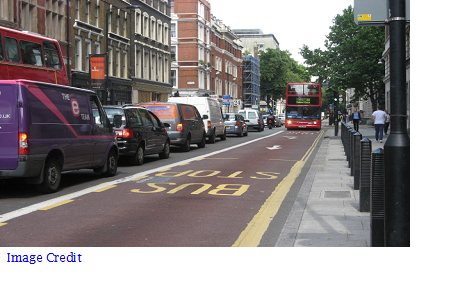 What happens if you use a bus lane when you shouldn’t?

If you drive in a bus lane in a non-permitted vehicle or during peak operational times, you will almost certainly receive a penalty charge notice in the post. These penalties are upheld to ease congestion, ensure bus lanes are kept free for their intended purpose and public transport runs on time.

It might seem harsh but for all those commuters who use public transport, being stuck in a bus lane because of a parked car and being late for work is very frustrating! Car drivers should not be tempted, even though the empty lane might be incredibly enticing when you’re running late. Most bus lanes have cameras installed and dedicated operatives just looking for those rule-breakers.