Topiary is said to have Roman origins, from approximately 44BC. Calvinus, an advisor to Caesar himself, is acknowledged for bringing topiary into Roman gardens. In letters from Pliny the Younger, a judge, described figures being cut into foliage, often in the form of animals, obelisks and inscriptions on the grounds of his villa in Tuscany.

Throughout the 16th century, topiary was commonly seen in the form of parterre and knot gardens amongst the gardens of the rich, but also on a more modest scale in the simple cottage gardens. Classic topiary shapes such as spheres, cubes, cones, spirals and pyramids were also established at this time. If you fancy some shapes artfully cut into your hedges, contact an Essex Tree Surgeon at a site like Benchmark Landscapes, a professional Essex Tree Surgeon.

Fashion for topiary designs become more complicated and the French-Dutch style arrived in England in around 1660 after it was first established in the Netherlands. The 17th century gardens of Levens Hall Park in Cumbria, England are an example of this type of topiary and are even recognized by the Guinness Book of Records as the world’s oldest topiary garden. 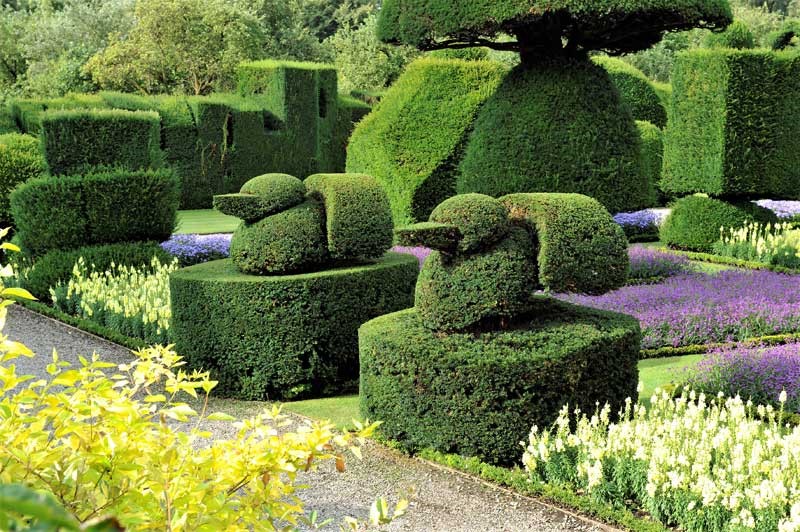 A satirical essay about “Verdant Sculpture” published by Alexander Pope in The Guardian in 1713 mocked the topiary of fashion and so it continued on a much smaller scale in the garden cottage, where traditional forms such as spheres, cones, and peacocks occasionally made impressive centre-pieces.

In the 1840s, botanist and author John Loudon complained of the loss of topiary in the English garden. In just a matter of years, architectural topiary was again back in vogue, followed in the 1870s by topiary sculptures. English cottage garden styles continued to be popular in the late 19th century, with the revival of roses and herbaceous borders.

In the mid-1900s topiarists started creating portable pieces – a new form of topiary – made from fast-growing, easily shaped plants trained over frames. Frames remain as a permanent pruning guide and can be filled with moss and then planted or placed in bushes. This style was first introduced in Disneyland in America, where the cartoon characters were created in topiary-form to capture the imagination of visitors to the park. 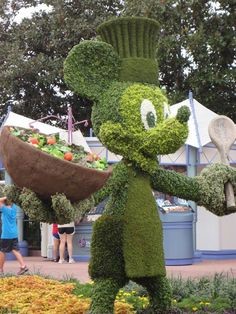 Appreciation for portable topiary and mosaiculture continue with hugely impressive examples seen, for example, at the 2008 Summer Olympics in China, and many contemporary entries of topiary art to the Philadelphia Flower Show every year. Re-ignited interest in period gardens has brought about the revival of traditional topiary being practiced again for the joy of the public hopefully for years to come.