Are you wondering what the upcoming Spring/Summer trends are going to be for menswear this year? Then look no further as this is the run down on what’s hot as the weather warms up (hopefully).

Neutrals are set to be big this year with stone being the most popular colour shown by designers for the upcoming season. Stone is a cross between a white and sandy shade and it’s a great alternative to the stark whites that often come out in nice weather. It’s also a great colour for a suit, whether formal or casual. It also warms up skin tones so there’s no need to worry about pale winter skin. For Mens Farah Shirts, visit http://ejmenswear.com/brands/farah.

Many of the fashion shows showed that vertical stripes were big this year among other patterns. While vertical stripes are not new, they were being shown in lots of varying widths, almost in a ‘deckchair’ print style. Pastel colours were infused with darker colours to create an interesting clash at the Paris Men’s Week.

Outer wear seems to be reflecting the current political climate and many of the fashion shows occurred either side of the EU Referendum. This caused political speculation across a Europe divided on the subject of immigration and that seems to have inspired themes of travel, voyaging and cross-cultural mixing were frequent in Milan, Paris and especially at London Collections Men. Interestingly, this manifested itself through the rise in popularity of traditional hiking gear in even the most established fashion labels – and most notably with almost every big brand showing a technical parka or anorak cut from light waterproof fabric, often in an eye-catching colour or pattern, and kitted out with all manner of high-end hardware.

After the popularity of stone, it might surprise you to know that pink was the next runner up. Not a baby pink but a warm, dusty rose hue which was reflected strongly by Gucci and Topman. The most popular way to wear it was in full summer suit form, but if you’re looking for a way to incorporate the trend easily without being quite so bold, simply add a burst of it by slipping a pink crew neck T-shirt under your tailoring. 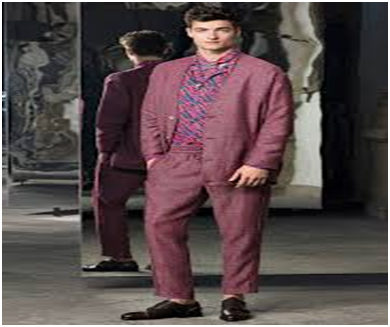 Another colour reigning supreme is purple. Perhaps it was all about Prince’s untimely death only a few months before, but rich royal purple was a significant colour in a notably muted summer season. It’s a bold menswear move and the best advice is probably to wear it with other dark colours to keep it in check.

Another style making a revival is British punk which has emerged as a key inspiration for many designers. Sometimes this was explicit such as braces and acid-splashed jeans or the zippered trousers at Louis Vuitton, however, often it was far more subtle. While slouchy trousers were clearly the shape of the season, there was a significant majority which were drainpipe slim and cropped above the ankle and sleeveless jumpers making appearances in most major shows.